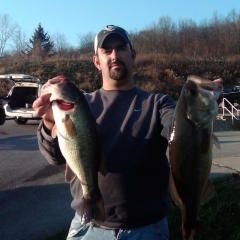 The final bass tournament of the year has come and gone.  The bass club I fish in, West Penn Bass Hunters, had there final tournament of the year on Lake Arthur last Sunday.  I had not pre-fished for this tournament, but Lake Arthur is my home lake so I had a good idea where the fish might be.   After looking through my notes from the past few years, I decided that I would need to fish shallow weedlines and/or wood to get my fish.   We launched from 528 launch at 8am, with clear skies, no wind, warmer than average air temp, and the water temp was 49°.  My first stop of the day was a cove about half way down the lake.  Not knowing exactly where the fish would be I picked up my white chatterbait and started down the bank.  It didn’t take long to get my first hit, maybe 15-20 minutes, but it was just a 13” largemouth.  My next bite, coming just a few minutes later was much better, a solid 4.56lb largemouth.  After getting that big girl so early, I was planning on having a great day of fishing.  I fished around that cove for the next few hours, changing my lures and trying a spinnerbait, jig, jerkbait, and a beaver but was only able to get few more dinks.  I moved down around Bear Run next but didn’t get anything down there so I decided to make the run all the way back up to muddy creek.  I fished around in weeds with a spinnerbait and chatterbait for a few more hours with no success, so I decided to try dragging a beaver.  I was able to get one hit on the beaver, which ended up being my last keeper of the day, a 3lb largie.   My final stop of the day was up in Shannon’s Bay where I got one more dink on a chatterbait.  It was time to take in my fish in and see how everyone else did.  My total weight with my two fish was 7.65lbs and it was just enough to squeak out the win over two other guys that had three fish limits.  It was a great day to be on the water as the weather was nice and even though the fishing wasn’t great the size of the fish I got made up for the low number of fish I caught.