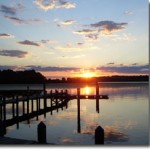 The last weekend of April marked my second trip ever to the Potomac River and my first Mr. Bass tournament I have ever fished. As previously stated the tournament was held at the Potomac River and we launched from Smallwood State Park. Dad and I had spent two days practicing for the tournament and camp in Smallwood State Park. They have great camping facilities and if you camp there they wave the $10 per day launching fee. Since I was a kid dad and I have fished and camped together. This trip was no different than those old trips. We fished hard and at the end of the day sat around a camp fire and relaxed.

Through practice I found very little that led me to believe that I had the right fish to win the tournament. I had a small pattern that consisted of throwing chatterbaits and flipping wood with beavers. There was one creek that when dad and I went into it Wednesday we caught 2 keepers (one was a 4lber) and 2 dinks in a very short period of time. Those keepers came on chatterbaits and lipless crankbaits. We left once we stuck the 2 keepers and decided I needed to find more fish. Over the course of the next day and a half, I found nothing as good or even close to my creek. Granted I didn’t have much practice time I still felt that I had failed through practice. Little did I know my creek was better than I expected.

Day one of the tournament I told my partner that I had one creek to fish and where those fish were located. I could tell he was more than disapointed. In practice him and his partner fished that area and had no success. I was still optimistic. From my last trip to the Potomac River I learned that during high tide the fish would scatter on the flats making them hard to locate, but as the tide drops they relate to the creek channel. We started the tournament during high out going tide and so we started working the flats adjacent to the creek. I took me 4 casts to hook up with my first keeper. However, I got my first look at what was in store for me because half way to the boat the fish came off. My rider (Scott Umberger) and I continued fish the flat. As the tide got lower we caught more and more fish. We also lost more and more keepers. I never have became comfortable fishing a crankbait because of the risk of loosing fish. This tournament my dislike for fishing crankbaits has grown. Even though I boated over 40 bass that day, I lost 4 keepers during the day. I ended up weighing in 2 fish for a total weight of 4.66lbs. I was disappointed to say the least because 2 of the keepers I felt were in the 4+ lb mark. If I would have landed those fish I felt I would have put myself in good position to qualify for the classic and win the event.

Day 2 my partner (Steve Steiner) and I headed back to the same creek. When I told him that I lost 4 keepers and Scott (my partner from day 1) lost 3 keepers he was excited. I knew I had next to no chance to catch the leaders, but I was fishing for a classic birth day lunker. On my 10th cast of the morning I hooked up with a nice keeper on a red eye shad. It was a nice 3lb fish and I fought it to the boat and as the fish was coming to the surface the hook popped out of the fishes mouth. I couldn’t believe it. I had started the day on another lost fish. That set the tone for the day. Instantly I knew I probably cost my chance at a limit, but I continued to fish hard. It took about 1 hour to get another strike, but when I did it was a nice 2 lb keeper. With one in the livewell I started to feel better. Over the next hour I boated about 10 bass and lost about 5. Almost every fish was 14 3/4″ and the size limit was 15″. That is how my weekend was going. I went back to where I lost my first fish and slam. I drilled the best fish I had hooked up with. It weighed 4.8lbs. Now with 2 in the well at 9:30 my hopes were up again. We started catching alot of dinks. However, unlike the day before, we had alot of boat traffic in the small creek and it was taking its tole. I never caught or hooked up with another keeper in the creek, but Steve did catch one nice keeper. Then around 11:00 we never caught another fish there. around 1:00 we decided to head up in Mattawomen Creek to try finding some bedding bass. I managed to hook a couple of dinks and then it happened again. I flipped into a log and my line jumped and slammed. I drilled the hook into the fish and it took off for deep was like good fish do. I never got to see the fish because it popped off almost instantly.

Although my tournament was not a success in the standings, it was a success in that I shared a couple of great days on the water with some new friends and my dad. The fishing at the Potomac River is truly amazing. I can’t wait to be able to make another trip there.