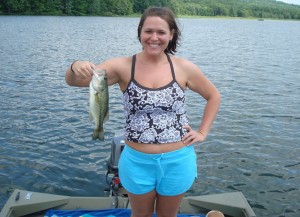 Unlike my boyfriend, I’m not an avid fisherwoman.  I don’t know the difference between a jig and crankbait.  Don’t ask me which bait is best to throw in a brush pile because I choose my bait based upon which one is prettier and matches my rod.  With all that said, I think I did pretty good for my first time out this year.

On Saturday afternoon, we decided to go to Lake Arthur and we got on the water around one o’clock.  It was a warm day but the wind was blowing to cool us and our dog down.  Jon caught the first and biggest fish of the day which was a good sized large mouth bass.  I don’t know how much it weighed, but to me, it looked huge.

My first fish looked puny compared to Jon’s, but I was excited about it because it was definitely bigger than my first fish last year.  At the end of the day I had four fish on a

cute purple worm.  I had a good time, got some sun and spent some quality time with Jon on the lake.